This article picks up where part #1 left off. If you have not read the first part, please follow this link to read it first: https://theprogressivecynic.com/2016/01/26/the-progressive-cynics-case-for-bernie-sanders-part-1/

While many accuse Bernie Sanders of being in favor of “big government” and huge tax hikes, the simple fact is that he is the best candidate for fighting against income inequality. Bernie has spent his entire career championing workers’ rights, better wages, guaranteed family leave, and an expansion of the social safety net that would do a great deal to alleviate the terrible plight many in the middle class have been put into.

Bernie joins a large number of unions (ex. SEIU) and worker organizations in supporting a $15 minimum wage, imposed on a national level. As a point of principle, he supports that policy that no full time worker in the United States should be forced to live in poverty and that large businesses should not be allowed to rely on federal social programs to subsidize the poor wages that they pay (ex. Walmart workers relying on SNAP). Raising the minimum wage would reduce the strain on welfare programs, increase the buying power of the American people, and begin to close the gap between worker productivity and worker compensation:

While Hillary supports increasing the minimum wage, she only supports an increase to $12 per hour, which is well short of a “living wage.”

Bernie Sanders would not only protect Social Security—the primary source of retirement income for a majority of Americans—but would expand the program and lift the contribution cap to stabilize the program’s finances indefinitely. Currently, individuals who have very high incomes only pay FICA taxes on the first $118,500 (ex. Bill Gates and some middle manager both pay just over $7,000 per year into the Social Security trust fund), making the tax scheme that funds Social Security extremely regressive. Bernie would lift this cap, ensuring that the very wealthy pay a full 6.2% of their income into the social security trust (instead of the 0.000063% Bill Gates pays now), which would ensure that the program remains solvent indefinitely. In fact, such a massive increase in revenue would almost certainly lead to an overall increase in benefits that would help millions of elderly Americans.

No other candidate in the race has supported such an expansion of Social Security or redistribution of wealth from the top to the middle. While Hillary opposes cutting Social Security, she would not expand the program, and the entire GOP field is, in one way or another, promising to cut Social Security (ex. raising the eligibility, age, cutting benefits, changing the cost of living index, etc.).

On the issue of taxation, Bernie Sanders supports making the US tax code more progressive and using the revenues generated from reducing high-income and corporate tax exemptions to fund new infrastructure programs. His website contains a very concise and clear set of investments and payment streams for those programs that is summarized in the following table (with a more detailed breakdown at the link):

All of these revenue numbers are highly reasonable and backed up by evidence. In fact, I would argue that they underestimate revenue, if only because spending on physical infrastructure programs would spur more employment (thus more tax revenue), investments in colleges would make the USA more competitive for highly-skilled jobs in the global market and reforming the American healthcare system would save billions of dollars a year in administrative waste.

While the exact specifics of the Sanders tax plan are subject to change (he must adapt it to gain Democratic support in the legislature), his preliminary proposal includes a 52% top marginal tax rate on individuals, taxing capital gains at the same, or higher, rates as normal income and increasing the estate tax. All of these tax reforms will predominantly affect the very wealthy and would allow the federal government to reduce deficits without asking the middle class to pay more, or accept service cuts.

While it is certainly true that Bernie plans to raise taxes slightly on the middle class (see above table) and Hillary has promised to never do so, this simple statement does not tell the whole story. Bernie will raise taxes on the middle class to pay for vital services that middle class Americans currently pay for out of pocket—the largest of these expenses are health care and college education. What Bernie is doing is raising taxes slightly in order to reduce private spending on these issues, resulting in a net-gain for those who are technically having their taxes increased. In effect, his tax “increases” simply transfer money and responsibility from private industry to the public sector, then give the average American a rebate while still providing the same quality service (savings are from more efficiency and the fact that the government doesn’t extract profits to pay stockholders or provide multi-million dollar executive packages).

An individual making $50K a year would pay $1,100 in new taxes (2.2%) to pay for his insurance while his employer would pay $3,100 for their side of the contribution (6.2%). In exchange for these “tax increases” the government will provide comprehensive insurance that replaces the private insurance on which these individuals currently rely. As the average private employer-sponsored healthcare plan currently costs individuals $4,955 (just under 10% of pre-tax income) and employers $12,591, the “tax increase” proposed by Bernie Sanders actually saves both workers and employers money. The average worker would have approximately $3.8K more income in his pocket each year, while the average employer would save approximately $9K in staffing costs. The only loser in this situation is the health insurance industry, who would lose millions of customers to the new system.

If you are in the middle class, Hillary promises not raise your taxes, but she also has no plans to implement the programs for which these small tax increases would pay. While it may seem counter-intuitive, this is one case where tax increases put money into the pockets of the average American.

In his 1944 State of the Union Address, FDR proposed a 2nd Bill of Rights which would have enshrined a series of progressive values in our constitution. He proposed a series of amendments that would have guaranteed six new human rights that the government would be responsible for promoting. Included in this list of new human rights were the rights to “a useful and remunerative job,” the right to a wage that provides “adequate food, and clothing and recreation” (IE. a living wage), a “decent home,” “adequate medical care,” “protections from the economic fears of old age, sickness, accident and unemployment” and the “right to a good education.” 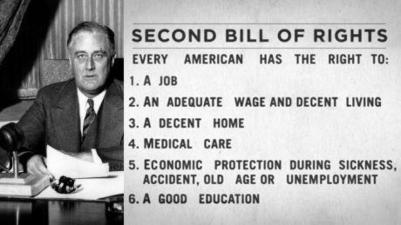 Bernie Sanders’s career has, in many ways, been defined by his pursuit of these progressive goals. He has consistently supported legislation that promotes these ideals and is now running his 2016 campaign on the promise that he will sign four of them into law.

Ensuring universal access to publically-funded free college—effectively including public universities in the existing social compact for education (which currently only goes from K-12)—would offer enormous gains. Students who attend public universities would experience a dramatic increase in buying power, families who normally couldn’t afford school would be able to send all of their children to college, and the United States would experience an increase in the number of college graduates.

While Hillary’s plan to reform public higher education is actually very good on its own merits, it falls short of classifying higher education as a right. She would make community college free, but only promises to make public colleges “debt-free,” by offering more aid to low and middle income students. She argues that this scheme is better than Bernie’s by saying that she doesn’t want to pay for the children of millionaires to go to school, but fails to mention that the children of millionaires are such a minuscule population in most public colleges that they are largely irrelevant. From a purely political perspective, this means-testing in Hillary’s plan actually makes it more vulnerable, as it is far easier to cut a “welfare” program than a universally-accessible “entitlement” program (ex. cutting Medicaid is far easier than cutting Medicare).

As previously discussed, public sector health insurance programs are more efficient than private ones and these “increases” in taxes actually save Americans money. If you can find a middle class family that only spends 2.2% of their income to pay for health insurance (the average is around 10%, depending upon the market and type of plan), I would love to be introduced to them so I can apply for this type of coverage.

In each of these issues, Bernie promises to push farther and aim higher than Hillary. While he may not succeed in attaining these lofty goals, he does not preemptively compromise to cater to the GOP and his history indicates that, as long as he holds office, he will never stop fighting to push for these ideals.

Part #3 of this article series will be released tomorrow at 11AM.

7 thoughts on “The Progressive Cynic’s Case for Bernie Sanders: Part #2”