This article picks up where part #1 left off. If you have not read the first part, please follow this link to read it first: https://theprogressivecynic.com/2016/01/27/the-progressive-cynics-case-for-bernie-sanders-part-2/

In 2008, Wall Street’s criminal activities nearly destroyed the world economy. They committed widespread fraud and engaged in the most irresponsible banking practices seen since the gilded age. After nearly destroying the world economy, they were bailed out, allowed to keep their bonuses, and had a fairly weak law imposed on them (Dodd-Frank) to prevent some of their more egregious conduct. 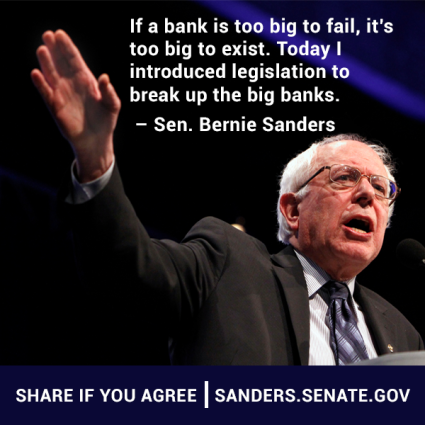 While Dodd-Frank is far better than nothing, it is still a woefully inadequate fix to the time bomb still sitting under our economy. Since the passage of the new regulatory regime, Wall Street banks have gotten even larger, their political influence has gotten stronger, and their bets have gotten even riskier (the current derivatives market is approximately $1.2 QUADRILLION and even a tiny fluctuation could cause the next crash).

Recognizing this problem, both Hillary and Bernie have proposed plans to mitigate these dangers to our economy and prevent the next crash: Bernie’s plan is extremely ambitious and would see the largest banks broken up into much smaller and less dangerous parts. Additionally, he would reinstitute the Glass-Steagall Act (repealed by Bill Clinton) which prevents big banks from using your depositor money to back up their risky bets. Conversely, Hillary would not break up the big banks or separate commercial and investments banks, but would focus on regulating the shadow banking industry.

Put simply, achieving the goals of both plans are necessary to protect the economy, but Bernie’s plan achieves everything that Hillary’s does and more so. Bernie’s plan is not only more comprehensive in regulating the banks, but it would also reduce their political power by splitting them into more manageable sizes. This case for Bernie’s plan was made extremely well by Robert Reich, who, in addition to being a world famous economist, also happens to be a long-time Clinton friend and an alumni of the Bill Clinton White House (Labor Secretary).

Beyond looking at the proposals Bernie and Hillary have presented on this issue, there are additional factors that lead me to trust Bernie over Hillary. As previously mentioned, most of Hillary’s top political donors are big banks, but, in addition to these campaign funds, she has also taken $2.9 million in personal income from big banks in the form of speech payments. When asked to release the transcripts of these speeches to the public by Lee Fang, a political reporter at the Intercept, she simply laughed and took another question (link to video).

Given her history of taking large amounts of money from giant banks, past support for the deregulatory laws that made the 2008 crisis even worse (ex. repealing Glass-Steagall), and the relative weakness of her plans to deal with future banking crises, I simply see Hillary as much less credible on this issue than Bernie Sanders. Even if she decided to implement her proposals, they would still fall short of what Bernie has proposed and I have little faith that she would be willing to alienate her donors by even going that far.

During his time in office, Bernie Sanders has consistently opposed “free trade” agreements like the North American Free Trade Association and the Trans-Pacific Partnership because of their negative effects on American workers. He perfectly summarized his case against such agreements in a recent Meet the Press interview with Chuck Todd:

“I [Sanders] voted against NAFTA, CAFTA, PNTR with China. I think they have been a disaster for the American worker. A lot of corporations that shut down here move abroad. Working people understand that after NAFTA, CAFTA, PNTR with China we have lost millions of decent paying jobs. Since 2001, 60,000 factories in America have been shut down. We’re in a race to the bottom, where our wages are going down. Is all of that attributable to trade? No. Is a lot of it? Yes. TPP was written by corporate America and the pharmaceutical industry and Wall Street. That’s what this trade agreement is about. I do not want American workers to competing against people in Vietnam who make 56 cents an hour for a minimum wage.”

While “free trade” sounds positive, Bernie is entirely correct that these agreements simply serve to facilitate outsourcing and serve corporate interests over human ones. Additionally, NAFTA and the TPP establish dispute resolution mechanisms which allow private corporations to challenge American laws (ex. worker and environmental protections) and impose monetary fines on the public if we cut into their profits.

Unfortunately, Bernie has not been successful in fighting against these “free trade” agreements because they are favorited by many corporate interests, and these interests buy influence across the political spectrum. NAFTA was passed on a bipartisan basis by Bill Clinton while the TPP has moved ever closer to law under Barack Obama. His steadfast support for the American worker has not wavered, but he has lacked enough support to stop the pro-corporate tide (although, this would change with him in the White House).

Hillary not only helped sell NAFTA to the American people while her husband was president, but she helped draft the TPP as leader of the State Department and called it the “gold standard” of trade agreements.  While Hillary came out against the TPP once she started her presidential campaign, this flip-flop creates a disturbing pattern for her on issues of trade. She supported NAFTA and took money from many of its beneficiaries…until she decided to run for president in 2008 and she switched. Obama hit her on this very hard during the campaign, yet he still decided to put her into a position where she would have influence over trade. Repeating this pattern, Hillary supported TPP while in power and took money from pro-TPP groups, but then flip-flopped again when it was time for her to run for office.

Guess who stood with Obama against NAFTA and who now stands against both Obama and Hillary on TPP.

Put simply, Bernie Sanders is the only candidate who I trust on the issue of trade. Hillary has lost all credibility on this issue with her pattern of supporting “free trade” while in power, then running as a pro-worker candidate, while the Republicans are simply all-in for multi-national corporations.

Even the most dedicated Bernie Sanders supporter can admit that he is not the most experienced candidate on the issue of national security—that distinction belongs to Hillary Clinton on the Democratic side (in her capacity as Secretary of State) and Jeb Bush on the Republican side (in his capacity as a foreign policy analyst with the Project for a New American Century).

However, raw experience on issues of foreign policy is actually not the best metric for determining a candidate’s credibility on national security. As demonstrated by neoconservatives like Cheney and Jeb Bush, one can be extremely experienced in foreign policy (have a long history of working in that field), yet have spent their career making lethal mistakes and advocating for destructive policies. Conversely, it is entirely possible for an individual who has not had a significant amount of exposure to national security issues to listen to the correct experts and make truly rational decisions which have positive outcomes.

Bernie Sanders is firmly in the latter category and, while he has had relatively few chances to control defense policy during his time in the legislature, his votes on issues of national security have been impeccable.

In my opinion, one of the best barometers for Bernie Sanders’s capacity to make good decisions on issues of foreign policy/national defense is his opposition to the Iraq War. In 2002, while the Bush administration was making a hard press for war, Bernie gave a prescient speech on his reasons for opposing the war. In the last 13 years, this speech has been proven painfully accurate and we have suffered as a nation for our failure to follow his advice on this issue. Here is an excerpt from the speech, with the most important points underlined:

“Mr. Speaker, in the brief time I have, let me give five reasons why I am opposed to giving the President a blank check to launch a unilateral invasion and occupation of Iraq and why I will vote against this resolution.

One, I have not heard any estimates of how many young American men and women might die in such a war or how many tens of thousands of women and children in Iraq might also be killed. As a caring Nation, we should do everything we can to prevent the horrible suffering that a war will cause. War must be the last recourse in international relations, not the first.

Second, I am deeply concerned about the precedent that a unilateral invasion of Iraq could establish in terms of international law and the role of the United Nations. If President Bush believes that the U.S. can go to war at any time against any nation, what moral or legal objection could our government raise if another country chose to do the same thing?

Third, the United States is now involved in a very difficult war against international terrorism as we learned tragically on September 11. We are opposed by Osama bin Laden and religious fanatics who are prepared to engage in a kind of warfare that we have never experienced before. I agree with Brent Scowcroft, Republican former National Security Advisor for President George Bush, Sr., who stated, `an attack on Iraq at this time would seriously jeopardize, if not destroy, the global counterterrorist campaign we have undertaken.”

Fourth, at a time when this country has a $6 trillion national debt and a growing deficit, we should be clear that a war and a long-term American occupation of Iraq could be extremely expensive.

Fifth, I am concerned about the problems of so-called unintended consequences. Who will govern Iraq when Saddam Hussein is removed and what role will the U.S. play in ensuing a civil war that could develop in that country? Will moderate governments in the region who have large Islamic fundamentalist populations be overthrown and replaced by extremists? Will the bloody conflict between Israel and the Palestinian Authority be exacerbated? And these are just a few of the questions that remain unanswered.”

In this short speech, Bernie predicted the nightmarish quagmire that the war would grow into over more than a decade. Unlike the majority of both parties—including Hillary Clinton—he anticipated the consequences of the war and took a principled stand with other anti-war politician (including Barack Obama; another politician with no experience in foreign policy). If we had listened to Bernie Sanders and Barack Obama, we would not have blundered into Iraq, wasted trillions of dollars in an unwinnable war, sacrificed thousands of American troops, killed hundreds of thousands of Iraqis, or destabilized the region. Additionally, in all likelihood, ISIS would not exist, Syrian refugees wouldn’t be flooding into Europe, and the Sunni-Shiite conflict would not be erupting into violence.

Bernie’s good judgment on foreign policy issues is not limited to his stance on Iraq. He has proposed several reforms that would completely transform our defense policy for the better: 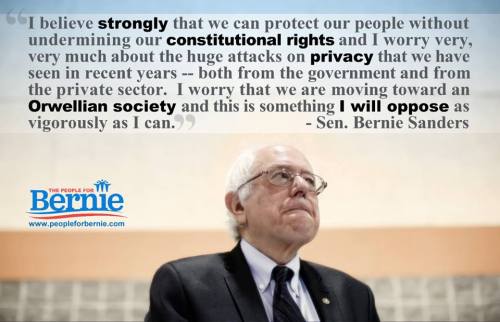 I support Bernie on issues of national security because he has a clear record of opposing stupid wars, pushing for smart defense policies over unreasoned aggression, and making the correct decisions when they are political difficult (ex. standing as the lone voice of dissent to the Patriot Act).

While this originally was intended to be a 3-part series, it has been extended to include a 4th part. Please come back tomorrow (or follow to get emails) to read the final part.