The Three Big Winners of the Iowa Caucus: Bernie, Cruz, and Rubio

The Iowa Caucus is a perennial political show that kicks off the voting half of the presidential primary contest. Candidates swarm Iowa to get votes and pander, thinking that a strong showing will propel their candidacy into the rest of the contests with momentum. In the grand scheme of things, the actual results of the caucus matter significantly less than the perceptions that they create, and determining the winner of the caucus can actually be fairly counter-intuitive. 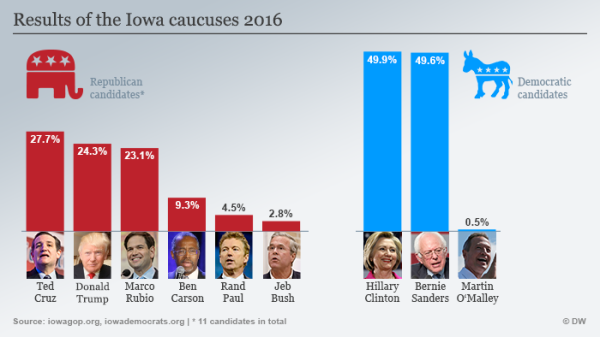 On the Democratic side, Hillary and Bernie finished in a virtual tie, with Hillary winning with 49.9% of the vote and Bernie placing a hair behind her with 49.6% of the vote. O’Malley came in a demoralizing third, with only 0.5% of the vote, and promptly decided to suspend his campaign. In real terms, this means that Hillary won 23 delegates, Bernie won 21, and O’Malley won none.

While the technical winners (purely in terms of delegates) of the Iowa Caucus are Hillary Clinton and Ted Cruz, I would argue that there were actually three winners. The biggest winner was Bernie Sanders, followed by Ted Cruz and Marco Rubio in a close tie for second.

At this point, it is pretty clear that Hillary won the caucus vote—albeit with a tiny margin. Given this it may seem a little counter-intuitive that Bernie was the largest winner on the Democratic side. That said, Bernie had far more to gain in this contest and Hillary had a much higher threshold for victory. Hillary entered summer 2015 with 50% lead on Bernie (≈60% to ≈10%) and was expected to crush him, not just barely edge him out by a margin of victory that could have been nullified if Hillary’s hadn’t won all 6 coin-toss decisions of the night (Iowa’s caucus rules are insane and yes, they literally tossed a coin to determine the winner in these precincts). 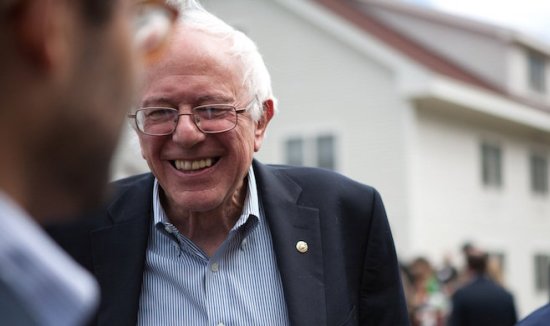 Applying this victory to a sports analogy: Hillary entered this caucus as the heavyweight title champ, fought 10 rounds against a contender most people said would fall in the first round, and won by a single lucky hit. Even though the challenger lost, he gets a great deal of respect and everybody who watched the fight—even supporters of the champion—have to admit that the challenger is a true contender who can fight at the highest level.

Throughout this campaign season, Hillary has worn her inevitability as a shield and argued that she is the most electable candidate by a wide margin. Her campaign has largely portrayed Bernie as the long-shot challenger who will fall by the wayside once the real voting starts. This narrative is directly contradicted by the Iowa results and, while it is certainly true that Bernie did not gain as much as he could have if he had pulled off an upset, it puts him on much better footing than he had before the caucus. This tie is particularly impactful given that New Hampshire is coming up fast and all polls indicate that Bernie will absolutely crush her (the moving RCP average indicates that he has a 17.5% lead on her).

A landslide NH victory, directly after such a slim loss, creates the perception that Bernie is ascending while Hillary is struggling. This will boost his campaign and could potentially recreate the same dynamic that allowed Obama to rocket past Hillary in 2016.

In addition to the voting results, the entrance polls collected during the caucus promise to be extremely beneficial for the Sanders. These polls contradict the attack line that only young men support Bernie (the “Bernie Bros” attack line that has become popular in some media outlets) and replaced it with a much more positive story:

All in, the night could have been better for Bernie, but he still came out on top in the grand scheme of things. While I am personally a little skeptical that he can pierce Hillary’s Super Tuesday firewall, his performance in Iowa gives me hope and, in my opinion, did nothing but improve his chances.

Ted Cruz won the Iowa Caucus by a fairly considerable margin given the number of candidates in the race. This isn’t too much of a surprise, as he has regularly polled as having a strong majority within the Evangelical community (which is disproportionately represented in the Iowa Caucus). While he has spent most of the race drafting behind Donald Trump, this win by Cruz gives him the air of credibility that could allow him to distinguish himself from Trump.

Trump is a force in the GOP race because he portrays himself as strong and confident. His loss in Iowa may shake this perception and create an opening for Cruz to attack him from the right and start eroding his support. Once he shows weakness, Trump will be ganged up on by everybody else in the race (he is hated by the establishment and competition for the other insurgents) and dragged back to earth—this could throw his campaign into a death spiral (losses show weakness, which erodes his support in the race, which leads to more losses…).

If Trump exits the race, all indications are that his extreme supporters will gravitate towards another “anti-establishment” candidate. With the virtual collapse of Carson, Fiorina, and Paul (who left the race today), it is extremely likely that his supporters will support Cruz. Depending upon the results of New Hampshire and Trump’s willingness to fight a tough political race, it is possible that Cruz may be ascendant during the busiest voting schedule of the primaries (starting March 1st), giving him the best chance of being the “anti-establishment” contender.

Marco Rubio came in third during the primary caucus, nearly tying with Trump. While this may not appear to be a very powerful finish, it is possible that he may be the biggest winner on the GOP side of the ticket. When the “establishment” crowd on the GOP stage (e.g. Bush, Kasich, Christie, et al) files out of the room, it will leave him as the “establishment” pick to fight against the anti-establishment candidates Trump and Cruz.

Put simply, the establishment HATES Ted Cruz, and will spend tens of millions of dollars supporting Rubio’s candidacy, particularly if the only other choices are Trump and Cruz. This money, in addition to the impending exit of the other establishment candidates with whom he is splitting the vote, put Rubio in an extremely strong position.

Given the current trajectory of the race, it appears that the final GOP nomination fight will be a Cruz vs. Rubio fight, with Cruz representing anti-establishment extremism and Rubio representing the establishment big money.

4 thoughts on “The Three Big Winners of the Iowa Caucus: Bernie, Cruz, and Rubio”