Super Tuesday: The Democrats Run on While the GOP Continues its Slow Self-Immolation

Super Tuesday this election cycle was an absolutely fascinating contest.

On the Democratic side of the ticket, the results were mixed. While Hillary managed to take a majority of the delegates, Bernie won several strategy contests and dramatically out-performed the punditry’s predictions. His victories in Minnesota , Oklahoma, and Colorado could also indicate that he has gained traction in the Midwest and will make significant gains in future March races.

There were few surprises on the Republican side of the ticket. Trump obliterated his opposition across the south (which was expected) and Ted Cruz managed to get significant numbers on the board as well, primarily due to his home-turf victory in Texas. Rubio suffered a humiliating defeat, winning only one state and coming in third during six of the 11 races. 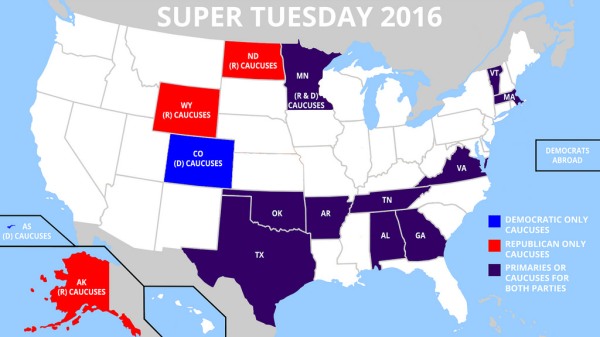 Note: ND and WY have non-traditional caucuses and delegates will not be awarded until the convention.

While many in the mainstream media will claim that Hillary was the runaway winner on the Democratic side, this simply is not the case. Hillary won 504 delegates to Bernie’s 340, but these victories were in the southern red states where she has long held an overwhelming advantage. She has increased her lead over Sanders, but must now win in states where she has far less of an advantage and that look a lot like the states which Bernie just won. While it will take a significant amount of work for Bernie to make up this lost ground, he still has a path to victory and his supporters also had a good night on Super Tuesday.

Here are the Super Tuesday results for the Democratic Primary: 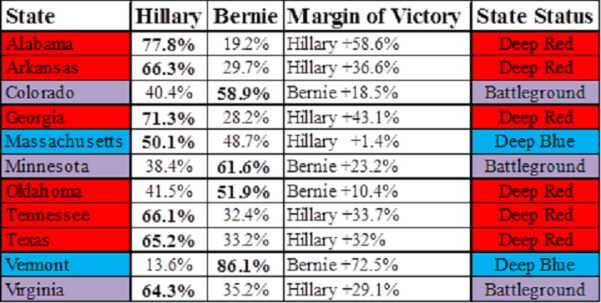 As you can see in the table, Hillary swept through traditionally red southern states, largely due to the fact that those states’ primary voters are older, disproportionately African American, and less likely to have been exposed to Bernie’s message. Because of these factors, and Hillary’s established campaign infrastructure in these states (i.e. from her 2008 run and what she inherited from the Obama campaign apparatus), Hillary was the expected winner and her margins of victory were very strong.

Bernie’s victories in Colorado, Minnesota, and Oklahoma were never certain (polling was limited), and his strong showing in these states bodes extremely well for his candidacy. The states coming up in March (e.g. Nebraska and Maine at the end of the week) more closely resemble these states than the Deep South ones which Hillary won, and his large margins of victory could indicate that he has an advantage going into other races in the Midwest and West.

From a general election perspective, Bernie’s victories should put the final nail in the “electability problem’s” coffin. He won two must-win swing states for the Democrats by overwhelming margins (Minnesota and Colorado), while Hillary only won one (Virginia). The solidly red (e.g. AL and GA) and solidly blue (e.g. VT and MA) states are only really relevant for the primary election, as we know who will win those elections in the general, regardless of the nominee. This split backs up the polling which indicates that Bernie is a far stronger general election candidate than he is a primary candidate. His toughest fight is against Hillary Clinton and, if he gets the nomination, he will simply run roughshod over the GOP. Conversely, Hillary has strong support among strong Democratic primary constituencies (e.g. southern African Americans), but struggles in the more independent states which are vital during the general.

The most worrying thing to emerge in the Democratic Super Tuesday results is the precipitous drop in attendance when you compare the 2008 primary to the 2016 primary. Of the Super Tuesday states, only Colorado saw an increase in their caucus attendance (NYTimes estimates), while Texas saw a staggering decrease in attendance of over 50%.

When I plotted the change in voter turnout with the support for both Bernie and Hillary using a scatter-plot, here is what I found: 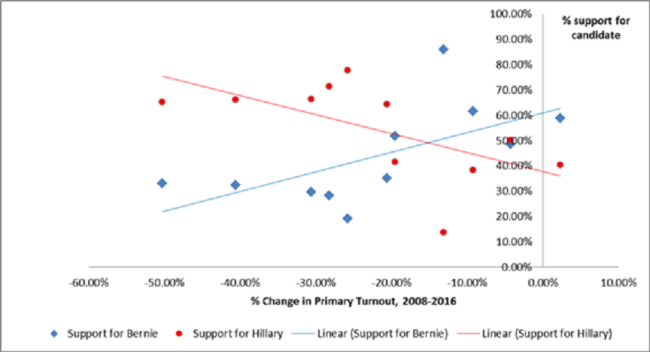 The pattern being illustrated here is clear: states where the attendance has not dropped significantly tend to vote for Bernie, while states where attendance has plummeted are much more likely to support Hillary. If this pattern continues into later states, it represents a real danger come the general election.

Hillary is winning in states with low turnout and which tend to already vote GOP, and has demonstrated weaknesses in the states which she will most need to pick up in the general. Conversely, the GOP is experiencing overall very high turnout (likely due to anti-Obama fervor and their hatred for Hillary) and will be a real threat in battleground states. When combined, this creates a danger that the Democrats will have depressed turnout (if they pick Hillary as the nominee) in swing states at the same time that the GOP increases its mobilization, leading to a wave election like we saw in 2008. This is a worst case scenario that could give the GOP a government trifecta.

The GOP Race Runs Off the Rails

In the run-up to Super Tuesday, there was a great deal of hope in the Republican punditry that Marco Rubio would swoop in and demonstrate true momentum against Trump and Cruz. These hopes were entirely in vain and the race now appears to be narrowing to a contest between the two anti-establishment extremists. While Rubio’s campaign is not dead and buried yet, he would need to win staggering victories in key states to capture the nomination, even through a brokered GOP convention.

A Cruz vs. Trump race is one where the American people are certain to be the real losers. Such a race is the equivalent to one of the old Godzilla movies, where Godzilla and some other hideous monster duke it out in Tokyo, leveling half the city to decide who gets to level the other half…and yes, in this analogy, the American political system is Tokyo and we are its citizens.

Here are the Super Tuesday results for the Republican Primary:

As you can see in the table above, Trump won 7 of the 11 Super Tuesday races (AL, AR, GA, MA, TN, VT, and VA), Ted Cruz won 3 (AK, OK, and TX), and Marco Rubio only won 1 (MN). While the delegates have not been fully apportioned yet, current estimates give Trump 237 delegates, Cruz 209 delegates, and Rubio 94 delegates.

When we add the preliminary Super Tuesday results to the past GOP races, we see a clear hierarchy begin to emerge. Trump is the clear and dominant frontrunner, with Cruz running over 100 delegates behind him, and Rubio sitting over 100 delegates behind Cruz. If there aren’t significant shifts in voting patterns (e.g. Trump’s support base collapsing), it appears that either Trump will win the nomination outright, or the GOP will enter a brokered convention without a clear establishment front-runner on the board.

If there is a brokered convention, the GOP has no good options:

Put simply, the GOP nomination has run off the rails and is now freewheeling across the political landscape, trailing smoke. It is simply impossible to predict where things will go from here, but I can only hope that the American people recognize how crazy this nomination fight has become and decide to vote blue come 2016.

4 thoughts on “Super Tuesday: The Democrats Run on While the GOP Continues its Slow Self-Immolation”