The leak of the Panama Papers—internal communications from the Panama Law Firm Mossack Fonesca—confirms the worst fears of progressives. They prove that the global elite have established a secret system of legal loopholes, international agreements, and corporate cutouts, designed solely to facilitate tax evasion, theft, and the hoarding of wealth. 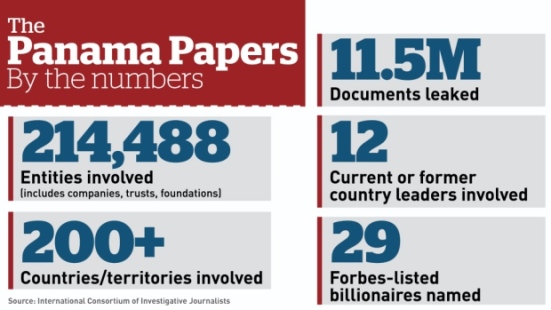 This system is very hard to make sense of if you don’t have significant knowledge of public policy and economics. That said, you can simplify the components of this corrupt machine into three primary categories: the lawyers, the politicians, and the moneyed elite.

Law firms like Mossack Fonesca exist to facilitate this system, guide elites through its complexities, and create legal blockades to accountability. They are, in effect, legitimized money launderers who turn huge profits off of helping elites plunder society.

Powerful politicians are both the beneficiaries and protectors of this system of corruption. They helped create this system by passing law and trade deals designed to legalize this type of corruption and hide it within a complex series of legal statutes which makes it very hard for the media to assign blame. Once the system is set up, these politicians take advantage of this corruption by using it to extract as much wealth from their society as possible, as well as to launder bribes given to them by the moneyed elite.

These corrupt politicians are not isolated to any political ideology or nation—it is truly bipartisan and multi-national in its scope. In the USA, most of the GOP joined a lot of pro-corporate Democrats—including both Barack Obama and Hillary Clinton—to support the Panama Free Trade Deal, which W. Bush wrote to facilitate this corruption. On the international front, world leaders from a diverse range of nations, from the King of Saudi Arabia and Emir of Qatar to the Prime Minister of Iceland and members of the Spanish royal family, have been implicated in this corruption.

The moneyed elite are the largest beneficiaries of this system and the source of the corruption that created it in the first place. Money buys power, often through corrupting politics, and will use this power to protect itself. In order to protect their wealth from taxes, the elite across the world have used their influence to support and promote this system. They have “donated” billions in legal contributions to political races, paid explicit bribes under the table, and employed thousands of lobbyists and fixers to make sure that this corruption is protected.

For as long as the global population is ignorant of this system, it works very smoothly: Corrupt politicians are bribed (legally and illegally) by the elite to fix the rules in their favor. They use these rules to hide their ill-gotten funds, creating an incentive among the political elite to sustain and protect the system. Lawyers act as facilitators for the corruption and take their cut for their trouble. The moneyed elite benefit immensely from their relatively small investments into corrupting politics (e.g. invest a couple million into corrupting politics so that you can save billions through tax avoidance later), and are able to grow their wealth even further.

In short, the participants of this system create a self-perpetuating machine of greed and exploitation, which enriches all involved to the detriment of everybody else. Nobody has an incentive to change the system, as everybody profits from the corruption.

Unfortunately, while this leak is significant and has made waves across the world, it is likely only the tip of the iceberg. There are other firms like Mossack Fonesca and, these leaks only scratch the surface of this shadowy web of corruption.  If the media doesn’t cover this story exhaustively, keep digging, and hold all involved accountable, there is a very real danger that those involved will avoid any consequence for their actions. Some famous politicians will end up falling on their own swords, becoming the public scapegoat for this corruption, and the system will return to the shadows—the elite will declare the problem solved once the scapegoats are replaced, and will do nothing to eliminate the real causes of this corruption.

In order to actually address this system of corruption, several actions are necessary (you could write a book on each action):