The Democracy Spring Will Not be Televised

If you only rely on the mainstream/corporate media for your news, the term “Democracy Spring” may not mean much to you. This is because most of the media has refused to cover the movement that is currently protesting legalized corruption in the capital, engaging in large-scale civil disobedience. 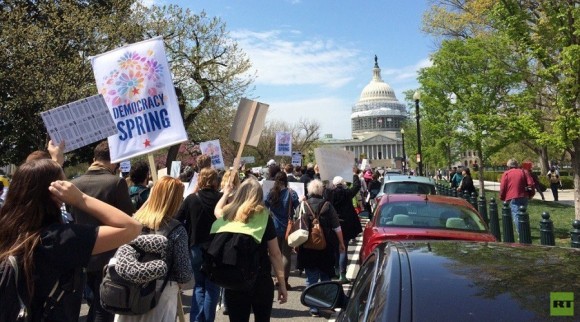 Ten days ago, thousands of protesters began a 140 mile march, from Philadelphia to Washington D.C., in order to raise awareness of legalized corruption in Washington and demand reform. On Monday, this march ended in D.C., where approximately 600 protesters performed a sit-in on the Capital steps. This was an entirely non-violent protest and approximately 400 activists were peacefully arrested by the D.C. police for refusing to disperse.

The ideology of these protests is simple, broad-base, and non-partisan: they want to remove the influence of money from our political system and protect the voting rights of all Americans. While the activists may have dramatically different views on taxation, social issues, foreign policy, and regulation, they are united in the idea that our political system should be controlled through democracy, rather than oligarchy.

No corporate media outlet in the United States (e.g. CNN, NBC, Fox, etc.) has covered this story in depth and many have completely neglected to mention it. The best reporting of this story has come from foreign media outlets like RT America and independent media sources like Alternet.org and Vice News. Additionally, some ideologically based internet media outlets have also covered this story, including the right wing Townhall and the left wing Common Dreams.

The reasons for this corporate media blackout are two-fold:

First, corporate media outlets are part of the establishment and have a vested interest in preserving the current status quo. The mainstream media is controlled by 6 corporations which benefit from the very corruption that these protests seek to eliminate—they use tax shelters to avoid corporate taxes, pay huge salaries to executives, and are part of the revolving door between politics and big-money (e.g. politicians are hired as “analysts” by the media and the reporters are hired as PR flaks by political campaigns). 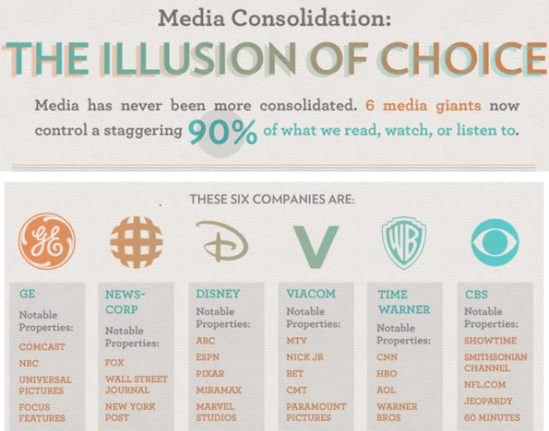 Second, the corporate media is the primary beneficiary of money in politics. A huge percentage (approximately 80%) of the corporate and big-money donations that have corrupted the American political system are funneled to media outlets in the form of advertising payments. Estimates from NPR predict that the 2016 political races will result in $4.4. billion being spent on television advertisements by political campaigns.

Because Super-PACs are not considered part of a political campaign, they do not benefit from mandated discounts on advertising space. This means that corporate media outlets can charge above-market rates for these political ads and PACs will still pay to be put on air (billionaire backing gives certain PACs a virtually unlimited bankroll).

A third prong of this advertising revenue problem comes in the form of corporate advertising revenue. Companies like Boing and BP run ads on corporate media outlets to appeal to the political class and to purchase some power over media outlets (it isn’t as though they run those ads so that Americans will buy fighter jets or barrels of oil). If money were removed from politics, there would be little point in this advertising, as politicians would have no legal mechanism for accepting bribes, and they would stop running them.

In totality, if the Democracy Spring movement were to achieve its ends and create significant campaign finance reform, these corporate media outlets would lose an appreciable amount of advertising revenue and influence. As such, these media outlets have a vested interest in marginalizing the protests and making sure that as few Americans know about them as possible.

Because the corporate media cannot be trusted to report this issue accurately, it is important that you seek out alternative media sources to remain informed as to what is being done to fight corruption in Washington. Don’t just turn on CNN and expect them to cover the most important stories in the country today—they simply won’t do this, as it is in their self-interest to prop up the status quo, even if the status quo is harmful to democracy and the welfare of the American public.

7 thoughts on “The Democracy Spring Will Not be Televised”