Using Triangulation to Predict the Consequences of a Trump, Hillary, or Bernie Presidency

The term “triangulation” was coined by Bill Clinton’s chief of staff, Dick Morris, to describe their administration’s tactic of seeking bipartisan agreement. According to Morris, a triangulated position is “a position that not only blends the best of each party’s views but also transcends them to constitute a third force in the debate.” Understanding this term is absolutely key to accurately assessing what each potential presidential administration could realistically achieve is if elected.

Depending upon the post-election distribution of power—presidency, House and Senate—there is a staggeringly wide distribution of outcomes. Power is likely to be divided between the parties and potentially very little will get done, but there are clear areas of agreement where the passage of new policies is possible. The following Venn diagram illustrates some of the triangulated issues between each potential power divide. The areas of intersection between each group identify areas of policy agreement that may allow for deal-making and progress/regress. 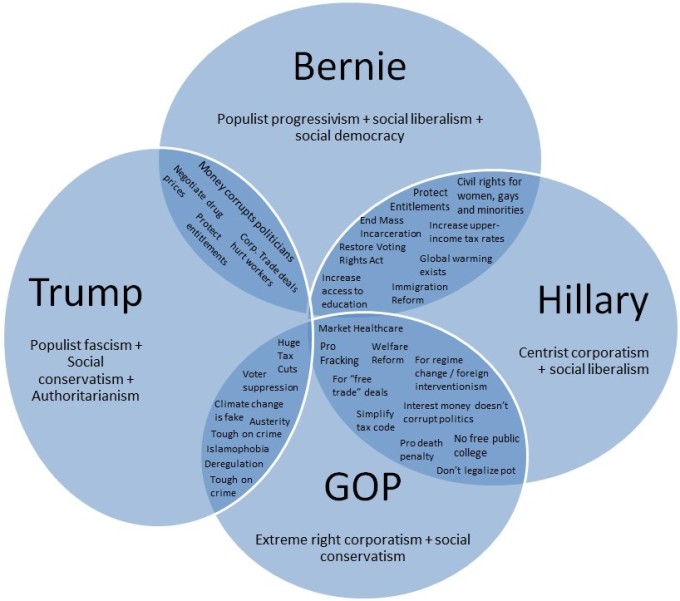 Here are a few examples that illustrate how to read this:

Areas where there is no overlap (Hillary/Trump and Bernie/GOP) represent divided governments where there is virtually no agreement on major policies, thus it is hard to predict what could happen. While it is possible that some level of horse-trading and log-rolling could allow legislation to be passed, the most likely result in these situations is complete federal paralysis. We saw this exact dynamic play out in 2010, when populist Republicans (Tea Partiers) were elected en mass and essentially shut down the government to obstruct the establishment Democratic president.

When reading this diagram, it is important to note that Trump and Hillary both have histories of radically shifting their policy preferences (e.g. Hillary opposed gay equality and supported a border wall up until several years ago), thus it is possible that some of their policy positions will shift in the future. In fact, I would be willing to bet a considerable amount of money that Trump will shift dramatically to the left for the general election (e.g. increasing the minimum wage, drug legalization, etc.) while Hillary will edge away from some of her progressive positions that she championed in the primary (e.g. gun reform).

7 thoughts on “Using Triangulation to Predict the Consequences of a Trump, Hillary, or Bernie Presidency”