In Aftermath of Istanbul Terror, Trump wants us to Become More like ISIS

On June 28th, ISIS terrorists perpetrated a coordinated terrorist attack on Turkey’s largest airport, located in Istanbul. Three attackers, wearing suicide vests and carrying rifles, entered the airport and began firing at travelers. Police and security returned fire, and two of the attackers detonated themselves in the airport terminal. The third attacker detonated himself outside of the airport terminal, presumably trying to kill the travelers who were fleeing the other two bombings (a fairly common terrorist tactic). In total, this attack left 41 people dead and at least 147 more injured. 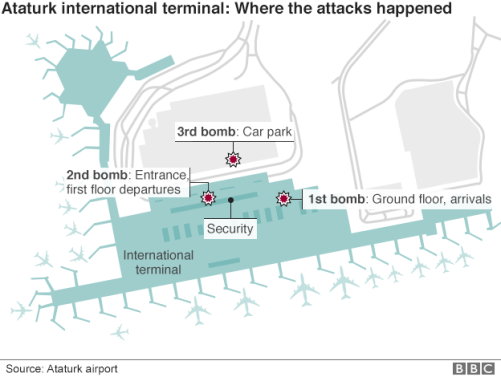 Currently, authorities in the USA and Turkey believe that these attackers were trained and directed by the leadership of ISIS and were not simply inspired by the group. Authorities have identified all three of the attackers as foreign fighters from Uzbekistan, Russia and Kyrgyzstan, while they believe that the person who trained them is a known Chechen bomb expert.

Because of the public nature of this terrorist attack, there are numerous CCTV videos of the events circulating social media. While these give us a very good idea of what happened, they are definitely disturbing and I would advise caution before viewing them.

In the aftermath of this terrible attack, numerous politicians have made statements, ranging from calls to destroy ISIS to thoughts and prayers for the victims. While most of these responses were pretty standard for political leaders in the aftermath of a large terrorist attack (sadly, there have been enough such attacks that these responses have become easy to predict), Donald Trump’s response was an extremely worrying outlier that illustrates the danger he poses to the world if elected president. Trump reacted to the brutality of ISIS by decrying our nation’s weakness and demanding that the USA begin to emulate our enemy’s brutality and willingness to commit war crimes. He is, in effect, calling for the USA to become like ISIS so that we can fight them on even footing. I am not being hyperbolic and here is a link to the full video of his statements on this.

Here are a few select quotes from this video which pretty much summarize his argument:

“We have laws, and the laws say ‘you can’t do this; you can’t do that; you can’t do a lot.’ Their laws say that you can do anything you want and the more vicious you are, the better. So, we can’t do waterboarding, which isn’t the nicest thing, but it’s peanuts compared to many alternatives. So, we can’t do waterboarding, but they can do chopping off heads, drowning people in steel cages—they can do whatever they want to do. Any you know, they eat dinner like us. Can you imagine them sitting around the table or wherever they are eating their dinner, talking about the Americans don’t do waterboarding and don’t chop off heads. They probably think we’re weak, we’re stupid, we don’t know what we’re doing, we have no leadership.

You know, you have to fight fire with fire (pause for cheering and USA chants). We have people out there who are so vicious, and smart, and they don’t know what it is to be beaten.”

When you strip out the bombastic language and hyperbole, the meaning of these statements is clear, and terrifying. Trump thinks that the USA is weak for restraining itself under the laws of war (e.g. not torturing or killing civilians) and that this is why ISIS has not been defeated. If elected president, he will “fight fire with fire” by dragging our nation down to the standards of ISIS, disregarding international law, and becoming as vicious as those who we condemn. 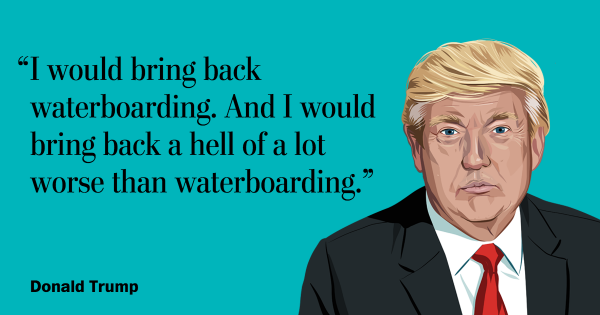 Presumably, Trump wouldn’t start ordering our soldiers to behead people, but he has already come out in support of using torture on suspected terrorists, killing the families of terrorists, and being less discriminating while bombing in civilian areas. If elected, there is no reason to assume that he wouldn’t try to implement all of these illegal policies, not to mention any others he may think up in the aftermath of the next terrorist attack.

Lost in Trump’s sociopathic bravado is the simple truth that, if we become like ISIS, it doesn’t matter if we defeat them—we will have replaced them and become an even worse threat to the rest of the world. ISIS is brutal and dedicated to its archaic ideology, but it isn’t a global threat in the way that the USA could become if we were to lose our moral bearings. We are a global superpower with no real military competition and a global reach. This means that, if we elect a president who orders our military to disregard international law, there is little the rest of the world can do to stop us. Our nation’s overwhelming military might creates the moral imperative that we, as voters, do not elect leaders like Trump, who will order our military to commit heinous crimes under the ideal that our crimes are necessary to stop other people from committing them.

One thought on “In Aftermath of Istanbul Terror, Trump wants us to Become More like ISIS”