An Honest Argument for Hillary Clinton, from a Bernie Supporter

Anybody to read my blog knows that I have been a steadfast Bernie supporter since the beginning of the primary season and have long been critical of Hillary Clinton. This has not changed, but the simple fact is that Donald Trump cannot be allowed into the presidency—he is a racist lunatic who knows absolutely nothing about public policy and would likely cause immense damage to our nation.

Sadly, many Hillary supporters are doing an absolutely terrible job at convincing the American public to vote for Hillary. They pretend that Hillary is the best candidate ever to run for office and that any criticism of her is either unfair, sexist, ignorant, or a product of the right wing media machine. These people are fundamentally incapable to recognizing her faults and will endlessly deflect or rationalize away any argument that impugns Hillary. As this is obviously false, these peoples’ arguments fall flat and potential voters (particularly younger voters, who have access to the internet and alternative media) are alienated.

While I don’t like the options that I have been given, they are set in stone at this point. As such, here is my honest argument to get Bernie supporters, progressives, and independents to support Hillary Clinton over Donald Trump:

We all know the substantive criticisms of Hillary’s record that have been levied by progressives and liberals—here are just a few examples:

Even stipulating that ALL of these criticisms are 100% true and that the worst fears of never-Hillary progressives are real, every sane American—left, right, and center—in the country needs to vote for her come November. Worst case, Hillary is a corrupt corporatist who will continue the status quo while enriching her donors and selling cosmetic changes to the American people; she is not incompetent or deranged and will not risk destroying the very system that made her powerful (e.g. by questioning the US debt and crashing the economy, or nuking Brussels over a twitter spat).

In a best-case scenario, Hillary is a very smart and duplicitous politician who has done whatever is necessary to get elected and will, once in office, stab her donors in the back and implement truly progressive policies. While her record makes this extremely hard to believe, it is still possible; more so that Trump actually doing anything to benefit our nation.

Trump is a certifiable lunatic who is not only corrupt (e.g. using his charity to pay off lawsuits), but also incompetent, racist, unstable and demonstrably worse than Hillary on essentially every metric that matters from a substantive basis. While many never-Hillary idealists argue that Trump is so corrupt that he will never be able to push his agenda, this is simply not a good argument given what we know of Trump’s history (for reasons explained below).

If Trump is elected president, it is essentially impossible that the Democrats would have captured a majority in the Senate or House of Representatives. In effect, Republicans would have complete control over the legislative and executive branches, impeded only by the Democratic filibuster in the Senate. Unfortunately, the filibuster is not constitutionally defined and it is possible for the Republicans to eliminate it given a rules change with no real chance for Democrats to stop them.

With the filibuster eliminated, the Republican majorities in the House and Senate would have a minimum of 2 years to pass basically any policy that they want to. The only thing standing between the American people and these toxic policies would be a veto by President Trump and I have no reason to believe that he will continue to buck the GOP establishment once in office. Based upon the legislation that the GOP has championed in the last few years, here is a sampling of what we would see passed:

Trump’s obvious incompetence wouldn’t even be a factor in this policy platform, as he wouldn’t need to do anything other than sign passed bills into law. In effect, he would be the candidate described by Grover Norquist—the conservative leader who designed the No Tax Pledge—in his quote from 2012 about the ideal GOP candidate:

“All we have to do is replace Obama. We are not auditioning for fearless leader. We don’t need a president to tell us in what direction to go. We know what direction to go. We want the Ryan budget. We just need a president to sign this stuff. We don’t need someone to think it up or design it. The leadership now for the modern conservative movement for the next 20 years will be coming out of the House and the Senate. Pick a Republican with enough working digits to handle a pen to become president of the United States.

While president, Trump would have the power to appoint conservative justices to not only the Supreme Court, but the numerous federal courts that are currently understaffed due to GOP obstruction. “His” justices would be chosen by conservative staffers, thought leaders and donors and they would be given a position for life. Lacking a filibuster, the Democrats would have no power to stop these appointments.

In addition to passing these insane Republican priorities, the GOP would also shepherd through every policy that progressives fear that Hillary would push, on a much larger scale. They would approve the TPP, engage in interventionist wars in the Middle East, support corporate cronyism, do nothing substantive about climate change, make it even harder for the American people to figure out who is buying our politicians, and entrench neoliberalism even further into our political system than it already is.

In effect, a Trump presidency would represent every bad policy that progressives fear that Hillary supports, along with every toxic idea cooked up by the GOP establishment. Given this, there is no rational policy-based argument that would support voting against Hillary as a protest.

For the more visual learners, here is what voting for Hillary will feel like for many progressives and independents who dislike and distrust her:

…and here is what it will feel like if Donald Trump wins the election and you decided to sit the election out or vote for a third party candidate in a vital swing state (e.g. Florida, Ohio, Pennsylvania, etc.).

Obviously, the first choice isn’t ideal and will be unpleasant, but the alternative is far more painful and may cause permanent damage. Some people argue that Trump will destroy the Republican Party (not incorrectly), but he may also cause irreparable harm to the nation at the same time. This is the political equivalent to fatally poisoning a cancer patient with arsenic because the poison will also kill the cancer.

While progressives need to vote for Hillary in 2016 to prevent Trump from ascending to the presidency, we cannot afford to be silent after doing so. After voting for Hillary, progressives need to get to work immediately and begin setting up a massive campaign to push progressive ideas on the state and national levels. Hillary has demonstrated that she is conscious of public opinion (e.g. when she shifted on gay marriage after the majority of voters began to support it) and progressives need to push the value of universal education, and strong safety net, and environmental/worker protections so that Hillary is held to her recent progressive rhetoric. 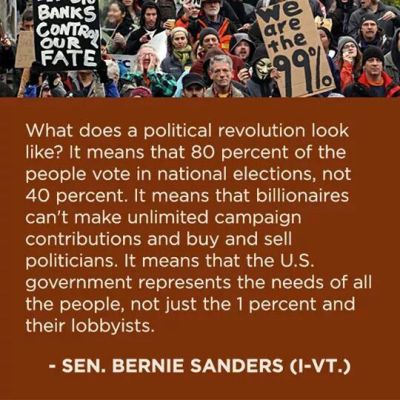 If Hillary reveals herself to be a secret progressive, we win on policy and can begin supporting her and working towards even more progressive policies. However, if progressive fears are realized and Hillary is confirmed as a center-right corporatist, progressives need to organize a primary in 2020 (ideally, Elizabeth Warren) and continuously work against the pro-corporate policies that she may promote (e.g. TPP, cutting tax rates and “eliminating loopholes” or allowing a tax holiday for offshoring corporations …all policies that Bill Clinton recently came out in support of).

2 thoughts on “An Honest Argument for Hillary Clinton, from a Bernie Supporter”