What to Look for as the 2016 Polls Close, State Results and Demographic Turnout

This Election Day, millions of Americans are going to the polls to choose between Donald Trump and Hillary Clinton. Who we choose today will become the most powerful person on earth, with control over the most powerful military ever formed, veto power over federal legislation, and broad executive authority.

As I have repeatedly argued, I don’t see any good choices this election cycle, but the lesser of two evils is demonstrably Hillary Clinton—Trump is an ignorant, xenophobic, emotionally immature, thin skinned, con artist and giving him the presidency could cause irreparable damage to our nation. While Hillary is corrupt and a creature of the establishment, she is smart, competent and will not accidentally destroy the very system that made her powerful.

I urge all voters to get out to vote today, even if you don’t think that your vote matters. 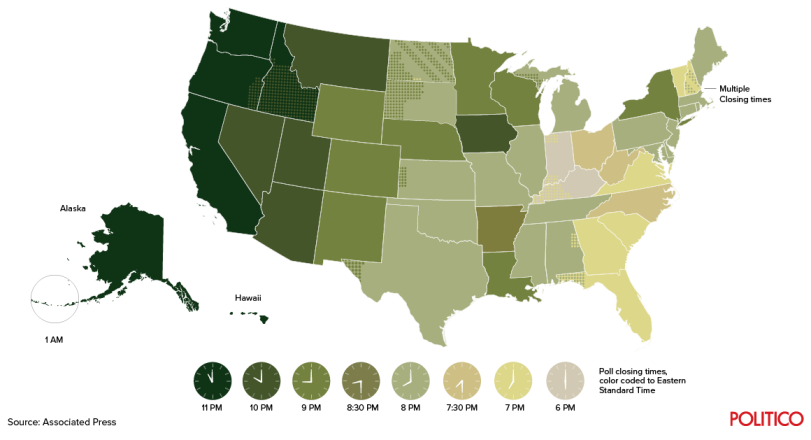 Polls will start to close at 6PM tonight (see map) and results will begin to be reported to the media. These results are often hard to assess if you don’t know much about politics (e.g. some early leads are artificial based upon which counties report first), so I have created several basic bellweathers to indicate how the race is going.

Hillary has a clear advantage going into Election Day. The 538 polling aggregate indicates that she has between a 65% and 72% chance of winning the election. While this sounds like she is the easy favorite, it is the functional equivalent to playing Russian roulette with 2 bullets in the 6 possible chambers—the chance of winning is high, but consequences of losing are intolerable.

If Hillary sustains her lead in all of the solid blue states, captures all of the lean blue states, and manages to capture even one of the battleground states, she will win.

Trump’s road to victory is real, but very narrow. He absolutely must win both North Carolina and Florida to have a real shot at winning 270 votes in the Electoral College. If Clinton manages to clinch a victory in either of these key states, there is virtually no way for Trump to realistically make up the votes and the election will essentially be decided.

While Trump may survive losing either North Carolina or Florida if he wins Michigan (unlikely, but possible) and Pennsylvania, a loss in both would be absolutely insurmountable.

The “Obama Coalition” is composed of young voters, African American voters, and Latino voters. Through mobilizing these three demographics along with white liberals and union voters, Obama managed to beat Hillary in the 2008 primary, as well as both McCain and Romney in the general elections. If exit polls indicate that Hillary has managed to mobilize this same mix of voters at rates that are similar to the 2008 and 2012 numbers, she has an extremely high chance of winning swing states.

Unfortunately for Hillary, millennial voters overwhelmingly voted for Bernie Sanders and recent Wikileaks have demonstrated how the establishment and Hillary campaign worked together to rig the playing field against him. This, and decreases in early voting by millennials over 2012 numbers, has led many to worry that many millennials will simply sit this election out. While they hate Trump and wouldn’t consider voting for him, many are not motivated to vote for Hillary and aren’t willing to take the time off of work to vote for her (particularly where there are lines).

African American voters absolutely despise Trump (earlier this year, he was polling within a polling error of 0% among African American likely voters) but, like with millennials, there reason to believe that they are unlikely to turn out to vote for Hillary in the same numbers that they did for Obama. According to early voting numbers, the African American vote is down from both 2012 and 2008, including in the vital swing state of North Carolina.

Specifically in North Carolina, African American early voting is down 5% under 2012 numbers. If this reduction is mirrored in Pennsylvania (where there is no early voting, thus no data on this issue), it could easily put her lead in jeopardy and open a significant hole in her firewall.

Latino voters may be Hillary’s greatest allies this election cycle. Trump has done everything in his power to alienate them (e.g. calling Mexican immigrants rapists) and all indications show that the Latino community is coming out in force this election. Voter registration numbers in Latino areas is up and early voting numbers indicate an approximately 3% increase in early voting participation for Latinos. If this early voting increase is carried over into voting day participation, then Hillary will have a significant advantage in key states (particularly Florida).

There are several key milestones that Trump must hit to have a reasonable chance of winning the 2016 election. As previously discussed, his chance of winning is under 35%, but this is not a negligible concern given the severity of his incompetence.

If Michigan or Pennsylvania elects Trump, the entire 2016 race would be thrown into turmoil and it could indicate dramatic shifts in other states. His victory in either of these states would represent a significant outperformance of the polls and would virtually ensure his victory in North Carolina and prelude a possible victory in New Hampshire. Such victories would indicate that the white, working class, vote was significantly underestimated in the polling and that areas with these demographics are far more vulnerable than anticipated.

Here is a theoretical winning map for Trump with him winning, despite losing FL and NV due to the high Latino participation

If exit polling indicates low Africans American and millennial turnout in key states, it doesn’t bode well for the swing states. As previously discussed, these are two of the three legs of the Obama coalition and it is unlikely that increases in Latino voter participation would override decreases in both African American and millennial turnout (just based upon raw populations).

Low-information white voters overwhelmingly support Trump, thus decreases in non-white and college voters will increase their percent of the voter population. It is conceivable that a majority of Americans hate Trump, but he still wins because not enough of the anti-Trump voters actually get out to vote (or are allowed to vote), thus the Republicans gain an out-sized influence.

The political dynamics of this issue resemble those of the midterm elections (e.g. 2010). Extremists and right wing lunatics tend to do well in these elections because the demographics of the voting population don’t match those of the general public. Hopefully, enough liberal independents and are motivated to go to the polls that this doesn’t happen, but there simply isn’t enough information available right now to discount it as a danger.

4 thoughts on “What to Look for as the 2016 Polls Close, State Results and Demographic Turnout”