The Hidden Lead Crisis in the USA: Part #1

Due to the size of this article, I have split it into three parts. This is the first part, the second will be released tomorrow afternoon, and the final section will be released on Saturday.

Historically, humans have used lead (Pb) for a wide range of industrial, craft, and construction applications. Lead is high malleability and relatively common, making it easy to access and work with. It is very dense, and not susceptibility to corrosion, thus is resilient enough for use in a variety of long-term projects (e.g. paint and pipes that last a long time). Unfortunately, lead is extremely toxic and, by the time humans realized how dangerous it is, we had already contaminated large swathes of our society with it.

Because lead has been used in so many construction applications, virtually every populated region of the USA is contaminated to some degree, ranging between negligible and extremely hazardous. This contamination stems from many sources, including lead pipes, lead-infused paint, residue from leaded gas, industrial waste and old electronics/scrap.

Lead exposure has a variety of toxic consequences, the worst of which affect the nervous system. It causes irreparable brain damage that reduces intelligence, empathy, and impulse control, contributes to seizure and motor function disorders, and can cause serious developmental disabilities. In addition to its catastrophic effects on the nervous system, lead can disrupt liver, intestine, heart, lung and kidney functions, as well as cause sterility. 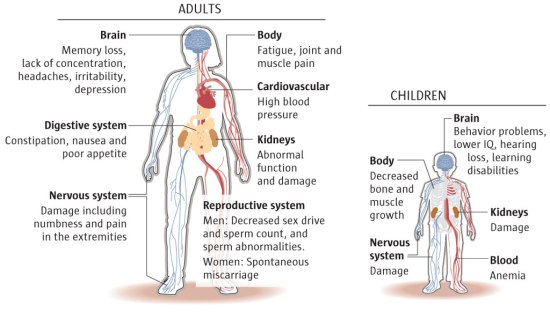 Exposure to lead is most damaging to children (because they are developing) and the elderly (because they are typically weaker and more vulnerable to toxins), but it is also extremely dangerous for healthy adults. There is simply no “safe” dose of lead, or amount of time under which exposure isn’t a danger.

While the Flint water crisis has been one of the most publicized cases of lead poisoning in recent years, it is only the tip of a very large iceberg. Millions of Americans are living in areas that are just as contaminated as Flint—if not more so—yet they are not in the news and often have no idea how much danger they are in. Most of these people will live their entire life without realizing that lead has reduced their IQ, contributed to their chronic health problems, or hampered their impulse control to the point where they get in trouble with the law.

Reuters just released a study where they mapped the blood lead levels of thousands of Americans, living in 21 states (the rest refused to participate or don’t collect enough data on the issue), in order to get some idea of where the worst lead crises are located. The results of their study are disturbing, and they found nearly 3000 census tracts and Zip codes where the average blood lead levels exceeded those of the residents of Flint, Michigan—these results indicate that millions of Americans are being exposed to lead every day and are at risk of serious, and avoidable, health consequences.

“Elevated” blood lead is defined as over 5 micrograms/deciliter

The map that was produced by Reuters is interactive and can give you an idea of how contaminated your neighborhood is (if data is available). It is important to note that this project maps blood lead measurements, not water or air quality; as such, it doesn’t tell you how the people measured were exposed to lead. To understand how people are exposed to lead, you must go into specific examples and look at the environment people are living in.

Lead In the Air

There are several ways that lead can contaminate our air.

The single largest source of lead in our air comes from lead paint. The USA didn’t ban lead paint until 1978, so any building constructed before then is potentially contaminated. As paint ages, it flakes and chips, producing dust that is spread throughout a building. If the aging paint is made with lead—as many industrial and residential white paints were during the 20th century—this dust will carry that lead into the lungs of those spending time in the aging building.

Those living in buildings with aging lead paint will suffer chronic lead poisoning. They are constantly breathing in lead dust and, once lead is in your system, it is essentially impossible to remove. Children are the most affected by this type of contamination because they breathe in more lead by body mass than adults and are still developing. Sometimes, improperly conducted construction will cause dramatic spikes in lead contamination, particularly if they are stripping paint during remodeling.

A second way that lead enters our air is through the burning of materials that contain lead. This most often occurs in the vicinity of industrial plants without proper anti-pollution measures, but it also can also occur when people illegally burn trash (e.g. lead-acid batteries, electronics, etc.) or when a building containing lead catches fire (e.g. an industrial warehouse or old building with lead paint).

Starting in the 1920s and ending in the 1990s, lead was added to gasoline in order to improve engine performance. Unfortunately, this emitted millions of tons of aerosolized lead into the environment, concentrated in urban areas and around highways, where millions of Americans live. Researchers believe that this lead may have contributed to the violent crime epidemic during the 20th century. Children who grew up during this era, surrounded by aerosolized lead, would have suffered prefrontal lobe damage, decreasing impulse control and increasing their propensity for violence.

This graph correlates lead gas and violent crime rates, with a lag to account for aging

Fortunately, lead is no longer included in American gas (it was phased out by the turn of the century). That said, imported or older gasoline can still contain lead, albeit not enough to pose a significant hazard in most cases.

One thought on “The Hidden Lead Crisis in the USA: Part #1”