President Trump Takes Office Today…Welcome to the Era of Idiocracy

I have studied the American political landscape for a decade—through college and grad school, as well as while working—and nothing that I have learned could have prepared me for writing the following paragraph:

Today, Donald Trump will enter the White House and become the most powerful man on earth. He will be given the authority to command the most powerful military apparatus in the history of the human species and access to enough weaponry to annihilate the entire planet in mere hours. He will be expected to set the tone and direction of the executive branch and will choose the leadership for vital offices that regulate wide swathes of American life. He will have the power to sign bills into law and veto those that he opposes.

While the White House is no stranger to incompetents (Read: George W. Bush), Donald Trump is categorically worse than any president we have had in recent memory. He is a failed businessman who has bankrupted multiple companies despite inheriting hundreds of millions from his father and being given access to the best education money can buy (unfortunately, education can’t fix stupid). His speaking ability borders on the fifth grade level and he lacks any understanding of the issues on which he speaks. He is petty and vindictive to the point where he has sued people for making jokes about him and has a disturbing history of racism, sexism and nationalism.

Put simply, America is standing on the deck of the Titanic and looking at the iceberg approaching, with no room to turn before impact. It is very likely that future generations will be reading about today in their history classes as the day that America followed through on one of its historic mistakes and the only real question now is which aspect of Trump’s presidency (I still flinch every time I write that) will be the most derided in the future?

Maybe it will be Trump’s signature on the repeal of the ACA, depriving 30 million Americans of their healthcare and worsening the embarrassment that comes from comparing our healthcare system to those in the rest of the developed world. 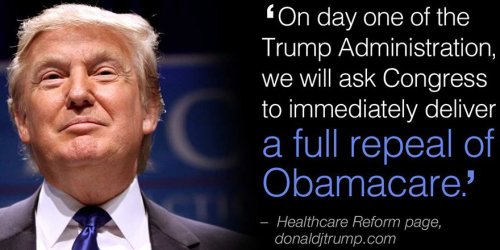 …or maybe it will be Trump’s appointment of a climate change denier over the EPA and the ex-CEO of Exxon Mobile as the Secretary of State, making any progress on climate change essentially impossible during this vital time. Failure to act on this will kill millions in the future (through drought, war, famine, and extreme weather) and destroy dozens of vulnerable cities that may have otherwise been salvaged.

…or perhaps it will be Trump’s tax cuts and deregulation of industry—particularly the top banks and investment banks—which will lead to the next recession, if not global depression.

…or maybe Trump will simply enter us into the next catastrophic conflict in the Middle East as an overblown reaction to the next terrorist attack and to fulfill his need to appear as a strong leader.

Hell, it could be all of these crises and more…that is, assuming that we have a future now that Trump is putting Rick “Oops” Perry in control over our nuclear stockpiles and non-proliferation program.

No, you’re not hearing this wrong, Perry is now on deck to run the agency he not only wanted to eliminate, but couldn’t even remember during a debate in 2012.

The number of ways that Trump is likely to screw up increase fractally over his 4 year term and his history suggests that he will manage to bungle his presidency to a degree that even his most vociferous opponents fail to predict (he managed to bankrupt a casino in Atlantic City). While I seriously doubt that Trump will get a second term, four years is enough time to inflict an astonishing amount of damage to our nation.

Democrats and progressive independents need to resist every negative policy that the Trump administration attempts to implement. On issues where Trump is actually more liberal than many corporate Democrats we can work with him (namely trade deals, infrastructure spending and campaign finance corruption), but, on all other issues, he needs to face an absolute wall of resistance.

There are Democrats who may sign onto some of Trump’s conservative policies (e.g. Cory Booker is friends with Betsy Devos, Trump’s Education Secretary pick, and has worked with her to push school privatization/charterization) and these Democrats need to face the threat of an organized progressive primary challenge if they choose to help him. Any Democrat to be complicit in an attempt to cut entitlements, irresponsibly reduce taxes, deregulate polluters, destroy Obamacare, or privatize public services needs to know that no amount of donor money will save their job come their next election.

While it is hard to be optimistic today, sane Americans need to continue this fight over the coming years. We may still be able to mitigate some of the damage from a Trump presidency, if only through mobilizing enough public outrage over his policies that his allies in the Senate and Congress have their greed eclipsed by fear over the political backlash to their votes.