Betsy Devos Confirmed as Secretary of Education, Iceberg Ahead for American Students and Teachers

Today, a theocratic ideologue who has no degree in public policy, has never taught in school, and who doesn’t support a strong public school system in the USA was confirmed to head the Department of Education. Betsy Devos is undeniably the least qualified and most extreme person to become the Secretary of Education since the inception of the office, and the consequences of this confirmation will echo for decades.

There is no nice way to say this—Devos is the Secretary of Education today because her family donates millions of dollars to the Republicans (including those who just voted to confirm her) and the Republican Party simply doesn’t care that she is very likely to harm the public education system, just as long as their campaign checks clear and they are able to afford private school for their kids. 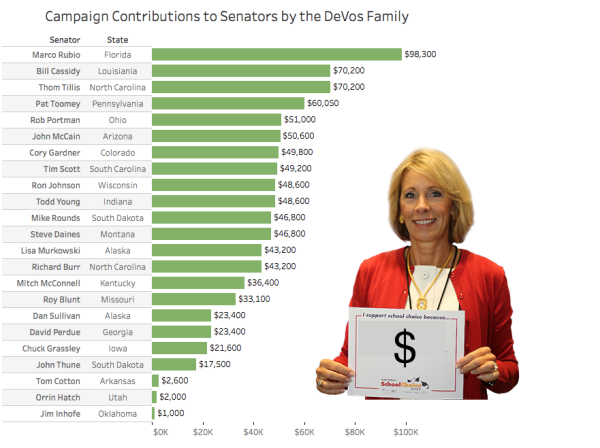 Devos is fundamentally ignorant about even basic debates within the education community, and this was put on display by Senator Franken when he stumped her into incoherence by asking about her opinion on proficiency (a base level of proficiency at each grade) vs growth (the change in proficiency each student achieves each year). Similarly, she was unable to describe how federal anti-discrimination laws applied in public schools when Senator Kaine asked her about her willingness to enforce the law.

In terms of overall knowledge of the agency she is going to be running, the closest modern analog for Betsy Devos is Michael “Heck of a Job” Brown, who ran FEMA when Hurricane Katrina devastated New Orleans. Just like Devos, Brown was a political appointee who had no experience in emergency management, and just like her, he was completely inadequate for the job. 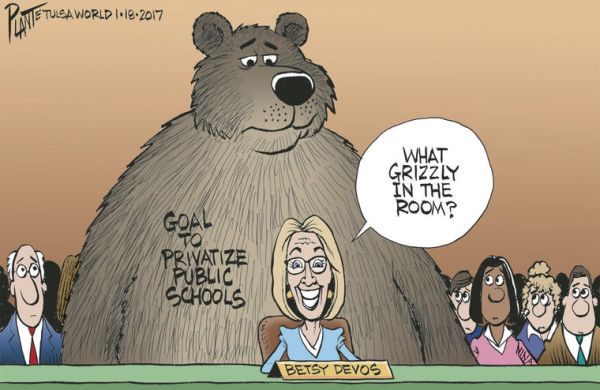 Devos isn’t just ignorant—she is actively damaging to the health of the education system in the United States. Her extreme social and political views endanger public schools across the nation and could even put federal college funding/scholarships into question. Here is a short accounting of the extreme views that Devos has championed in recent years.

Put simply, Devos being confirmed as the Secretary of Education is a disaster of epic proportions for every public school student and teacher in the United States. She will eviscerate federal oversight of local education, do everything in her power to shift public education into private hands, and advance the interests of religious extremists who don’t want to teach children about objective reality. Even if Devos only serves for four years, the damage she inflicts will be done and extremely hard to reverse (e.g. a kid entering an unregulated charter school in six months may spend their entire high school career there, not being prepared for college).

In addition to the damage that Devos is likely to do to the public K-12 school system, she also is being given control over the federal student loan bank. Not only does Devos have no experience managing such a fund (as exposed by Elizabeth Warren during her questioning of Devos last month), but she is also is opposed to federal regulations on for-profit education. It is extremely likely that Devos will wholesale destroy the regulations (e.g. requiring certain levels of job placement and loan repayment to be eligible for federally-backed loans) which prevent schools from lying to students so that they obtain federally-backed loans in order to pay for a worthless program. 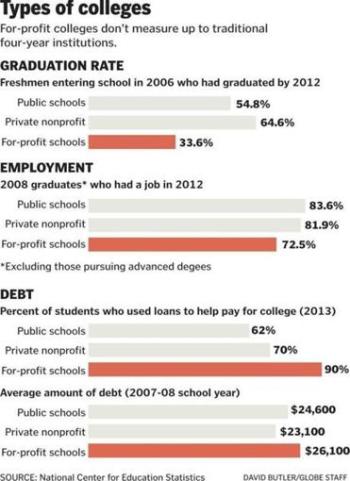 Devos is extremely unlikely to push back against Trump if he suggests an insane education policy—like when he floated the idea of defunding UC Berkley due to student protests—either because she agrees with him, or simply because she lacks the basic level of policy knowledge that is necessary to understand why the idea is bad.