Over the past two years, a group of governmental and corporate interests have been crafting a secret trade deal called the “Trans-Pacific Partnership” (TPP). This trade deal involves 12 Pacific nations—including Australia, Brunei, Canada, Chile, Japan, Malaysia, Mexico, New Zealand, Peru, Singapore, the United States and Vietnam—and has been described by some as “NAFTA on steroids.” 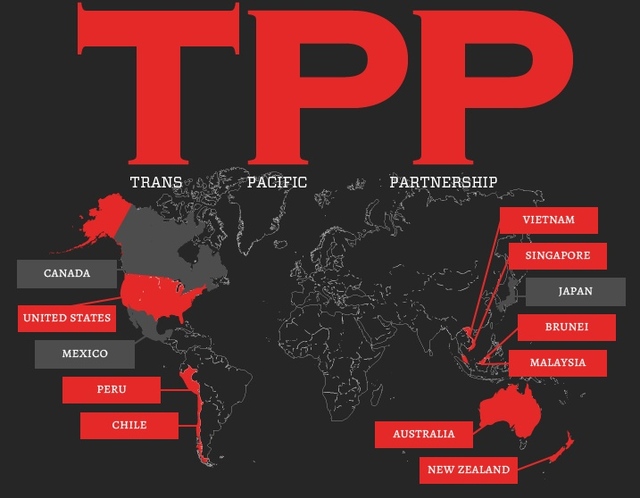 When I refer to the TPP as “secret,” I am not being hyperbolic or alarmist. The TPP has been crafted entirely behind closed doors, by a combination of private corporate lawyers and a select few representatives—when outside interests, including American Congressmen, have attempted to look at the agreement, they have been rebuffed. In fact, the few American politicians who have been privy to this trade deal were not allowed to make copies or even take pictures of the draft documents.

Despite the secrecy surrounding this treaty and the lack of access given to most American politicians, the Obama administration has publically announced hope that the treaty will be approved by Congress by the end of the year. This rapid progression from secret negotiations to binding law is entirely possible because of the bipartisan establishment’s support for the treaty and the fact that the treaty will likely be introduced in an up or down manner (precluding any amendments).

A Crack in the TPP’s Secrecy

Because of the secrecy surrounding the Trans-Pacific Partnership, writing about the impending trade agreement has been extremely difficult—facts about the specific contents of the bill are difficult to confirm and, even when leaks have occurred, those writing the treaty can hide behind the fact that the leaked document was just an unconfirmed draft. To further compound the difficulty behind publishing information about the TPP, many major multi-media companies support the TPP because it would benefit their economic interests. These issues have caused the coverage of the TPP to be cursory at best in the mainstream media.

Fortunately, the TPP’s veil of secrecy was pulled back slightly when the government transparency group WikiLeaks obtained and leaked a copy of a section of the TPP. The leaked chapter of the TPP is not a finalized document, but it does give journalists and activists a clear view into this otherwise obscured program.

The Wiki-leaked chapter of the TPP is one that pertains to the protection of intellectual property rights and expansion of patents. This leak exposes several extremely worrying provisions within the TPP which would grant multi-national corporations increased profitability through destroying competition, while eroding net neutrality.

It is important to note that the provisions of the TPP discussed below are only those which were revealed in the chapter leaked by WikiLeaks this week—the treaty itself is FAR longer (and it still remains secret), and the intellectual property rights chapter is simply one of many.

A significant portion of the intellectual property rights section of the TPP focuses on increasing the length and strength of patents. These provisions affect a wide variety of patent laws, but the most worrying of such expansions are found in the area of pharmaceuticals and medical technologies.

Under the TPP, international patent laws surrounding intellectual property would still be controlled by individual nation-states, but they would be more heavily influenced by international pressure from other signatories of the treaty—in effect, it creates an upward pressure for longer patents which ensure higher profits for corporations.

According to the Electronic Frontier Foundation’s analysis of the law, “the TPP could extend copyright term protections from life of the author + 50 years, to Life + 70 years for works by individuals, and either 95 years after publication or 120 years after creation for corporate owned works (such as Mickey Mouse).” 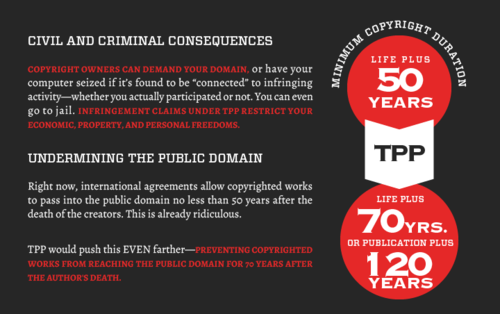 This increase in the length of intellectual property patents allows corporations to exclude competition and will result in the reduction of the free flow of information. Patents certainly have an important role in incentivizing development, but extending them by this degree has no real benefit to anybody but the corporation which is granted the state-sanctioned monopoly. 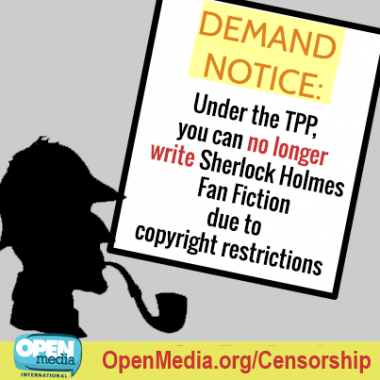 A Gift to Medical Industries

First of all, the TPP will expand medical patents to cover surgical procedures. This expansion is extremely worrying, as it will make surgery more expensive and more difficult to access—rather than simply using the best procedures for the situation, surgeons will have to contend with new surgery copyrights that would force them to pay royalties in order to utilize new procedures. In a best case scenario, this new copyright regime would make surgery more expensive, but it could just as easily make it impossible for many people to get the best care.

Imagine a situation where a doctor is willing and able to cure a person’s ailment with a relatively new surgery, but it stopped from doing so because he can’t obtain/afford the rights to perform the procedure.

Such royalties are absurd and are just an attempt to squeeze a little more money from the average person during medical crises. A surgical procedure isn’t like an MP3 player which involves a company making a product and requiring some security for their investment—there is no legitimate reason to copyright such advances. 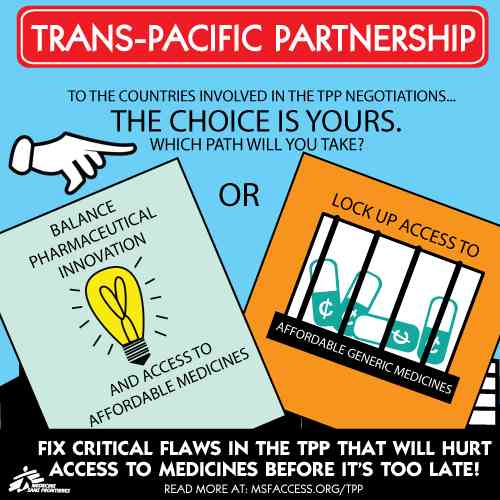 Secondly, the TPP will expand pharmaceutical patents to last longer and be easier to renew. By strengthening patents on pharmaceuticals, the TPP will grant even longer drug monopolies to corporations, thus increasing their profits at the expense of the people. Instead of being able buy cheap generic drugs, the citizens of the countries which sign onto the TPP will likely be stuck relying upon the more expensive name-brand drugs.

The TPP section on pharmaceuticals will facilitate increased “evergreening,” where a company makes slight changes to a drug in order to extend the patent. Currently, such extensions of patents require substantive and significant changes to drugs—under the TPP, these requirements are dramatically reduced, thus drug companies will be able to make insignificant changes to their drugs, claim that the drugs are a new and superior formula, and extend their patent on the drug beyond the original time limit. 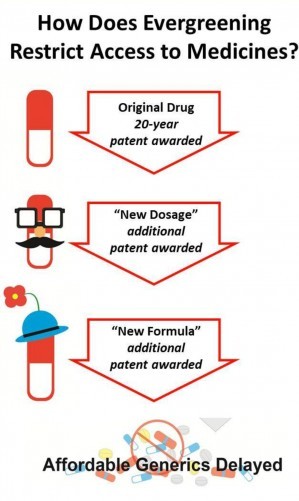 The TPP will further choke internet freedoms and net neutrality in much the same way that CISPA threatened to do before it was defeated by public outrage. Several provisions within the intellectual property rights chapter of the TPP increase the abilities of media producers to crack down upon unlicensed use of their media as well as to force internet service providers into positions of policing conduct.

Here is an excerpt from the leaked TPP chapter:

“Each Party shall provide that authors, performers, and producers of phonograms have the right to authorize or prohibit all reproductions of their works, performances, and phonograms, in any manner or form, permanent or temporary (including temporary storage in electronic form).”

While this provision may sound innocuous, it is actually a very threatening provision for most internet users. The inclusion of temporary versions of copyrighted material into this copyright law serves to make cache and buffer “copies” of online material fall under copyright laws. If this provision passes, it will render most streams of copyrighted material illegal to watch, as your computer automatically downloads temporary copies of every stream that you watch—in effect, this provision is a dream scenario for major multimedia organizations because it will allow them to crack down on any media viewing that they aren’t profiting from.

In order to enforce this expansion of copyright protections (as well as ones currently on the books), the TPP will compel internet service providers to police content and restrict services to people who are suspected of downloading copyrighted content. Specifically, this provision will enforce a 3-strikes rule—where suspected copyright infringers have their internet cut off after 3 allegations of infringement—while allowing ISPs to shut down sites that they suspect of hosting copyrighted content. 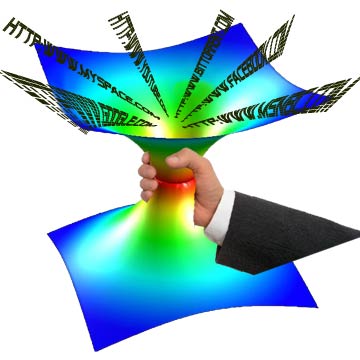 This expansion will give ISPs increased power to restrict content and will create a situation rife for abuse. Theoretically, any site like YouTube or Google would be subject to shutdown by ISPs under the suspicion that they are hosting illegal content, while anybody who watches streaming videos (thus downloading temporary copies) would be at risk of having their internet cut off.

As a final irony, the chapter on intellectual property rights in the TPP may dramatically expand the ability of corporations to protect their content, but it also has cut-outs which preserve nations’ ability to spy on digital content. An explicit loophole in the rules regarding the copying of copyrighted digital material “lawfully authorized activities carried out by government employees, agents, or contractors for the purpose of law enforcement, intelligence, essential security, or similar governmental purposes.” In short, this provision allows the NSA to claim that its spying falls under an “intelligence and essential security” classification, and continue its dragnet surveillance absolutely unimpeded, even as individuals are restricted.

While those who support the TPP claim that it’s only purposes are to promote free trade and economic vitality, the evidence contradicts this assertion. From what we have seen so far—and it is vital to point out that these very same proponents of the TPP are the ones who are preventing us from getting a complete view of the emerging treaty—the Trans-Pacific Partnership is less about free trade and more about giving multi-national corporations a massive goody bag.

In the single leaked chapter, the TPP will give media corporations the ability to increase their profits by killing competition, give medical companies the ability to hoard life-saving treatments for increased profitability and facilitate the under-the-table passage of a SOPA bill. If this is the harm that a single chapter does, it is difficult to overstate the potential harm that the TPP in its entirety could do.

At its basic level, the Trans-Pacific Partnership is a treaty crafted by corporations and for the sole benefit of the corporations and industries which have a seat at the table. Unfortunately, neither the American people nor the citizens of the other 11 countries involved have any insight as to the specifics of this impending treaty, or control over its contents. 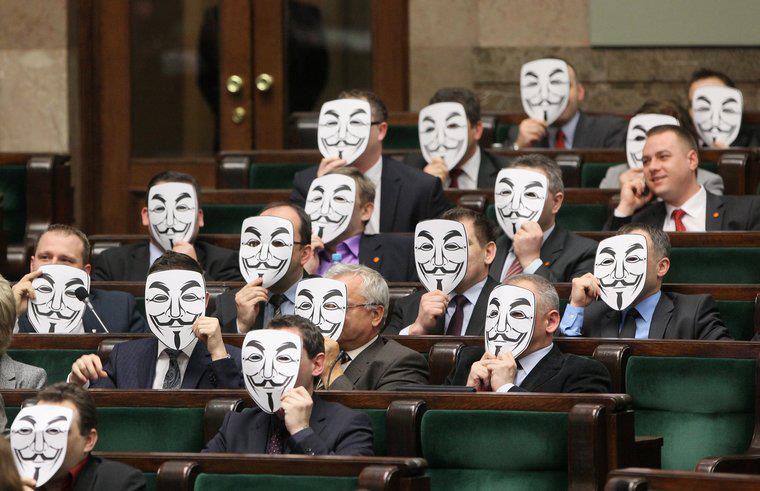 Perhaps our legislators will follow the example of this group of Polish politicians (protesting ACTA, which is the Atlantic brother of the TPP), but I am not optimistic. Any change will likely have to happen from the people up, not at the top, and every American has an interest in staying informed on this issue. Unless people get organized to stop this treaty from speeding into law, it is very likely that we will be living under the pro-corporate TPP in mere months.

4 thoughts on “The Trans-Pacific Partnership: Secrecy, Corporatism, and Multi-National Monopolies”