The Modern GOP is the Political Equivalent to a Meth Addict

Meth addicts—also referred to as “tweakers”—are legendary for their illogicality, obsession, and addiction. Long-term methamphetamine use leads many addicts to detach from reality, living in their own delusions and fantasies until they must return to this world in order to procure more drugs. In order to keep their “high” going, these addicts relentlessly chase their next fix and will do anything in order to get it, even if it has long term consequences for themselves or those around them. 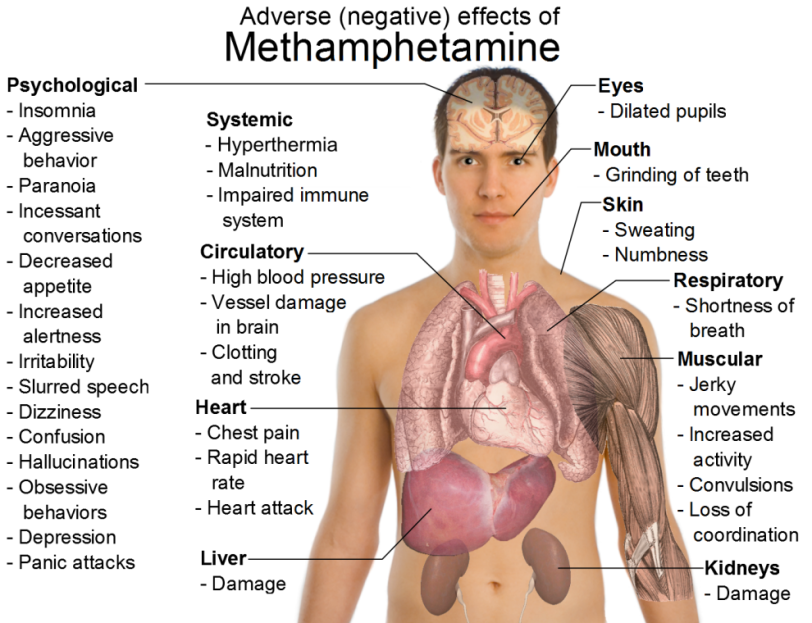 Unfortunately, the current Republican Party is the political equivalent to a meth addict: Large portions of the GOP have descended into a delusional mania, where they relentlessly chase the “high” of unrealistic policy goals (ex. improving the economy through austerity) and substance-free partisan victories. Just as with meth addicts, these politicians will do anything (ex. shutting down the government) in order to pursue their high and care little about the consequences to the country or even their own political careers.

This comparison is certainly unflattering, but it is not unfair and is actually very important to understanding the Republican Party’s recent behavior. That said, there are a few things which need to be made clear before I go further into this comparison:

With these caveats made clear, I will begin to break down my comparison in greater detail:

Meth causes extreme psychological symptoms which manifest as a complete disconnect from reality. A combination of sleep deprivation (meth keeps people awake) and the drug’s effects on the brain leads addicts to become delusional and kills their ability to reason; in addition to this, meth also causes obsession on goals which may or may not be possible (ex. using TV parts to construct a communicator that can reach alien life), which can turn violent against anybody who is seen as an enemy.

The modern GOP policy platform is composed of a series of discredited and unrealistic assertions. They support policies which are demonstrably false, or have been shown to have results wildly divergent from what the GOP is saying that they will do.

Economically, the GOP is enthralled with an Ayn Randian worldview which has been proven false. Business interests cannot regulate themselves effectively, “trickle down” economics inevitably fail to do anything but concentrate money at the top, austerity doesn’t help growth, and cutting taxes doesn’t create more revenue.

On issues of science, the Republicans have continually rejected the scientific consensus in favor of their religious ideals. They reject climate science, despite clear evidence for the existence of anthropogenic climate change, believe creationism/intelligent design rather than evolution, and have shown themselves to be wholly ignorant about human reproduction (e. “legitimate rape” and life beginning at conception).

In totality, large portions of the GOP party line are as non-factual and delusional as a meth addict’s belief that the reflections in mirrors are really spying on them. Both meth addicts and Republicans have an unshakable belief that their delusion is real and there is no amount of evidence or rational argumentation which will convince them that they are wrong.

Despite the blatant unreality of their goals, the GOP pursues them with a fervor that is simply unbelievable—they are absolutely relentless and willing to use every tactic in order to achieve victory.

Meth addicts and Republicans share an incredible obsession with achieving nonsensical goals and an inability to see the consequences of their obsession—the only real differences between the two lie in the types of goals which they pursue and their personal hygiene while doing it.

Tweakers may stay up for days at a time, without bathing, sleeping or changing their clothing, in order to take apart televisions and combine them into non-functional messes. Republicans wear suits, but they also obstruct for months at a time, pass the same bill over 40 times, and labor every day in order to reduce the federal government into a non-functioning mess. Both groups let their personal obsessions take over their lives and force them into making messes out of everything around them.

Over the past several years, the GOP has obsessed over cutting taxes, regulations and social programs, while refusing to do anything unless their obsessions are catered to. Regardless of the problem which is being addressed (ex. joblessness), the GOP goes back to one of its three goals and either demands that the Democrats give them concessions or asserts that their policy goal is the solution to the problem itself.

Due to the strength of their addiction, meth addicts resort to any tactic—including prostitution and theft—in order to feed their drug habit. This desperation combines with addiction and poor health (another consequence of drug use) in order to create a terrible downward spiral for many addicts which is nearly impossible to escape.

Republicans are desperate to achieve their goals and have availed themselves of every possible tactic. Like a meth addict, the GOP has schemed and plotted in a short-sighted effort to achieve deluded goals, while disregarding the larger consequences for their actions.

While meth addicts have held individuals hostage for money, Republicans have held the economy hostage by shutting the government down and threatening to force the US into default. 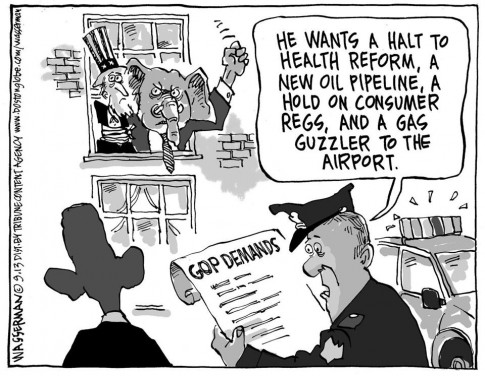 While meth addicts mug people on the street, Republicans want to “mug” entitlement programs and take thousands of dollars out of the pocket of every American.

Both meth addicts and Republicans are too blind to the consequences of their actions on others to rationally assess their conduct. In effect, they care only to get their “high” (or their tax cuts/ObamaCare defunding/etc.) and are tunnel-blind to the damage that they are doing.

The tactics of meth addicts and Republicans may be profitable in the short-term, they are extremely damaging in the long-term. Individuals who are victimized by the addicts call the police and the addicts are arrested, while voters who are victimized by corrupt politicians vote their officials out of office. In their descent into extremism, the GOP has lost wide swathes of the American public and only still holds power in the federal government through gerrymandering and big money—these measures only go so far, and it appears that the tactics of the GOP are going to result in huge electoral losses in the 2014 election.

Meth addicts tend to be incapable of correcting their actions without some external help. The cycle of addiction is very strong and is often impossible to break unless an addict is forced into some type of treatment.

The insane portions of the GOP appear to share this lack of self-reflection with meth addicts and have continued to do intensely unpopular things. Over the past few weeks, the GOP has achieved a staggering 75% disapproval rating and has caused the Congressional approval ratings to drop into single digits (below roaches, a zombie apocalypse and Dick Cheney).

Unfortunately, these politicians tend to live in gerrymandered districts, where their only fear is a more extreme right wing challenger unseating them in a primary. This gerrymandering allows even the most heedless of political meth-heads to remain in office, just as long as they don’t see a little bit of reason and start to moderate their views.

The commonalities between Republicans and meth addicts give the American public a very good insight into how we should deal with the GOP. Put plainly, we need to treat them as addicts who need help, yet are unwilling to change without a nudge:

First, we must refuse to buy into the delusions of the right wing and challenge their non-factual worldview at every turn. Just as we cannot feed the delusions of meth addicts if we want to help them get better, we cannot let the GOP continue to spout nonsense unchallenged.

Everybody in the media should call out any politician who makes absurd claims, and the GOP shouldn’t be able to skate by simply because they make so many delusional claims that fact-checking them becomes difficult (ex. fact-checking organizations stopped verifying Michelle Bachmann’s comments because it was taking too much time to explain why EVERYTHING that she said was wrong).

Second, we must do the political equivalent to “putting away the sharps” that some drug treatment councilors must do for drug addicts—in order to mitigate the harm that they can do, sane people must prevent the GOP from translating its delusions into law.

Sane Republicans and Democrats must join together and keep the government functioning, while preventing the insane majority of the GOP from implementing any of their more insane policies (ex. deregulating banks, destroying the EPA, etc.). During such a push, Democrats and sane Republicans must hold a firm line and not “meet halfway” between sanity and insanity.

Third, the American people must wake up to the GOP’s extremism and delusion and vote them out of office—this isn’t to say that they should vote in Democrats or progressive, merely that they should vote for sane and responsible people. This is akin to sending an addict away from the streets for a while by putting them into a program.

Personally, I would prefer that the lunatics get replaced with Elizabeth Warren clones, but that is unrealistic in the extreme. Conservatives should vote for conservatives, but they should be expected to ensure that their representatives are, at minimum, sane and responsible. Basically, the  needs to GOP replaces its Bachmanns, Cruzs and Gohmerts, with people who live in reality and who don’t think that threatening to blow up the economy is a valid negotiating tactic.

Barring this replacement of the lunatics, the GOP simply needs to go extinct and a new party needs to rise and balance the scales.

Finally, we need to put in place safeguards to prevent a “relapse” within the Republican Party (or a similar crisis within the Democrats). The media must continue fact-checking and ensure that no political party gets as far away from reality as the GOP currently is while the American people must stay vigilant to potential extremists in their elections.