Three Simple Reasons Why Religion is Incompatible with Democratic Governance

Over the past decades, the right wing in the United States has been extremely organized and active in attempting to codify their religion into law. These attempts have largely focused on rejecting the teaching/funding of science, propping up racial segregation, imposing gender stereotypes, oppressing gays, and attacking birth control/abortion.

Unfortunately, while the religious right is a shrinking minority, they are still powerful in American politics and their attempts to legislate religion have remained strong in recent years. During just this last month, Arizona almost implemented an anti-gay Jim Crow law (only stopped by a governor’s veto), while religious fundamentalists made arguments in our highest court that could lead to them gaining the power to impose their religion on their employees.

In the face of these attacks on the separation of church and state, it becomes more important than ever to remind Americans why religion and politics make such a toxic mix—in order to do this, I have condensed the issue into three basic statements:

1) Religious dogma is, by definition, authoritarian.

Most religions are based around a rigid upon set of myths and social rules that are common to a majority of believers—oftentimes, these myths and practices are codified by a founding document for the religion and enforced by the hierarchy of the faith.

For example: Christianity is based around the core belief that Jesus of Nazareth was the Messiah who died for all of humanity’s sins. This belief is codified by the bible and interpreted by the clergies of the different denominations.

There is simply no way to debate dogma, as the religious see it as the foundation of their entire worldview that is, by definition, correct; arguing with them on these points is about as successful as arguing with a rational person over the existence of gravity.

When a population is led by the religious, democracy takes a backseat to the religious dogma of the leadership. In effect, democracy is only allowed to exist within these societies in areas of policy that dogma (or the elite who claim to interpret the dogma) doesn’t dictate a clear policy on.

Even if the public begins to rebel against the dogma of the elite, those in power are so attached to their dogma that they will simply disregard the opinions of their population in order to ensure that the government stays in conformity with the religion. Because of this, religion in politics breeds authoritarianism and creates systems of government where the public is forced to follow the dictates of the religious leadership under threat by those in the government.

We have seen numerous examples of this type of religious authoritarianism in real life, primarily in hyper-religious nations like Iran, Saudi Arabia, and Afghanistan.

Religion seeks to explain the unknown and impose social order using the idea that one must have faith and accept the religion’s answers without proof. Regardless of what some zealots may say, there is no proof of god’s existence and it is this lack of proof that makes a religion a religion rather than a science—this is true whether you believe in the Judeo-Christian God/Allah/Yahweh or in the flying spaghetti monster.

In direct opposition with religion, public policy is based around isolating human problems and finding the most effective manner of solving them through the use of evidence-based logic. To craft effective policies, we must look at past policy results, studies, and academic research in order to determine what policies produce good and repeatable results (ex. there is a massive body of evidence which proves that universal education produces positive effects on society).

When rational public policy begins to include the irrational wild-card of faith, we lose all ability to predict the results of laws. As there is no proof of god or that any supernatural entity will step in and make an otherwise non-functioning policy work, crafting public policy that requires the intervention of a god is simply a recipe for dysfunctional policies.

For example: If a disease outbreak occurs, you can either implement evidence-based policies that involve quarantines, research, and medication, or you can implement the faith-based policy of praying to god for help.

In parallel with inserting faith into public policy, inserting human logic and rational policies into religion is toxic to faith. Faith only exists when there are unexplained phenomena, thus the more predictable and quantifiable the world becomes, the smaller the realm of faith in society.

For example, before the understanding of volcanology and plate tectonics, religious people had faith that prayer and sacrifices would appease the gods and stop earthquakes/volcanic eruptions. Obviously, when science explained the actual mechanics of such disasters, faith shrunk away from this area of life for all but the most extreme zealots.

3) Regardless of which religion is allowed to become the dominant force in politics, there will always be those who are oppressed for not believing.

The founding fathers of the United States recognized that no matter which religion could be chosen as the state religion, many Americans would be left out in the cold—because of this, they decided to let no religion have power over the state and to separate religion from politics with the 1st Amendment. 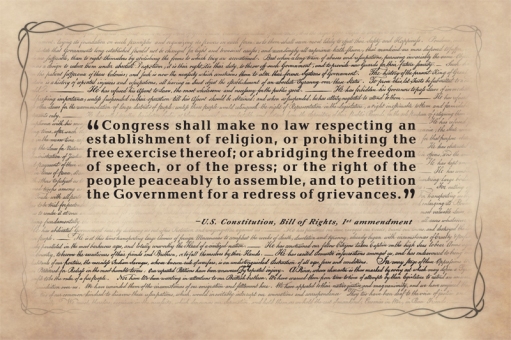 The United States is filled with people of different religions–including followers of every faith from Christianity to Vodun—and there is simply no set of religious laws that could be signed into law that would satisfy everybody. The single largest religious group in the USA is Protestantism, which only captures 51% of the population (and even within this number, there are many smaller sects and sub-denominations), thus a minimum of 49% of Americans is oppressed when even the most populous religion is codified into law.

Unfortunately, modern zealots don’t understand or care about other religions, thus they have attempted to dominate American politics with their view of “god’s law.” According to their thinking, these religious zealots see themselves as correct by default and that everybody who disagrees with them can literally go to hell.

Even in highly homogenized cultures like those in the Middle East, religious minorities (ex. Jews and Christians in Arab states) and minorities within majority religions (ex. Baha’i Muslims; a minority sect within Islam that is seen as apostate by most others, thus subject to execution or imprisonment–ironically, they are now based in Israel, which is the only Middle Eastern state where they don’t suffer persecution).

Put simply, unless you can perform the impossible task of making millions of people within a country voluntarily agree on every aspect of a faith, you cannot insert religion into law without oppressing the minority.